A bird feeder in Russia (live webcam, winter only)

Visit my webpage with live video is at https://birdfeeder.online/en/ !

Stream currently works 04:30-12:30 UTC (winter days are short here and now), it is somewhat usable 05:00-12:00 UTC. Other time you will probably see nice "We are sleeping" stream with current date, time and temperature of the feeder in its lower right corner.

Which town is it in, Brigadier?

Is it at a school?

Yesterday I saw twelve tits, six on each of the fat cakes, feeding furiously

I love to see all the people passing by too

Which town is it in, Brigadier?

Is it at a school?

Thank you on the good words

The cam could be even more clear, but 1) it is a cheap USB webcam which can't give out decent framerates at higher resolutions, and even at its current 640x360 it obviously starts to drop the framerate from 20 FPS at sunset; 2; it is behind a window so there are visible reflections when there are direct sun rays.

On the other hand, I fully control the whole setup myself (i.e. no youtube or ustream or alike in the chain), and, after a year of trials and errors, can build and scale such setups

The feeder and the cam are not at school, but the school is obviously beyond a frame's left edge, you're right

joiibear wrote:
Yesterday I saw twelve tits, six on each of the fat cakes, feeding furiously

You're lucky! I didn't see more than eight (5+3) yet, not counting those which sat on a stick.

Do you stream all year?

How long is it sunlit in mid-Summer?

No, I don't stream all year, only when there is a snow on the ground. Other times, there is a lot of food for birds in a forest, so we don't feed them. So, the feeder and the stream work starting at November and until March, maybe first half of April.

I am enjoying watching these active little birds at your feeder. They appear at first light and seem to love your suet/fat mixture. What are you mixing with the suet? Many of us here in Canada put out suet (mixed with seeds) for the birds in winter. Chickadees (like your tits), Nuthatches and Woodpeckers are the birds we see most often at our suet feeders here on Vancouver Island. We also put out black sunflower seeds for them. Do you also use sunflower seeds in that container?

I took these screenshots a little while ago when 5 tits were there. 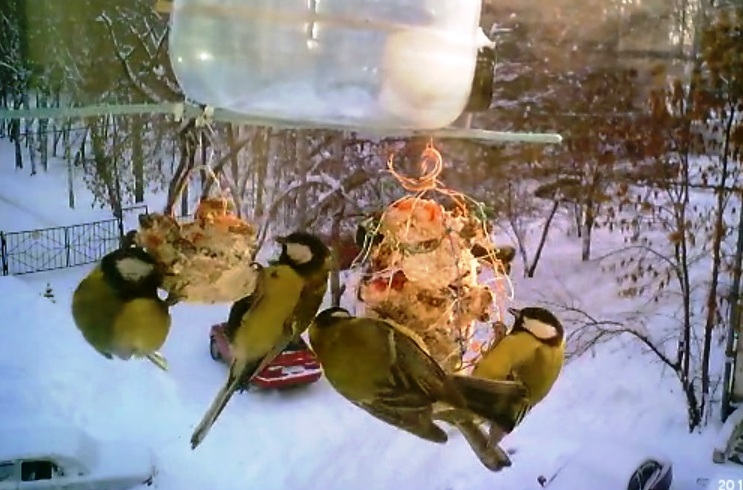 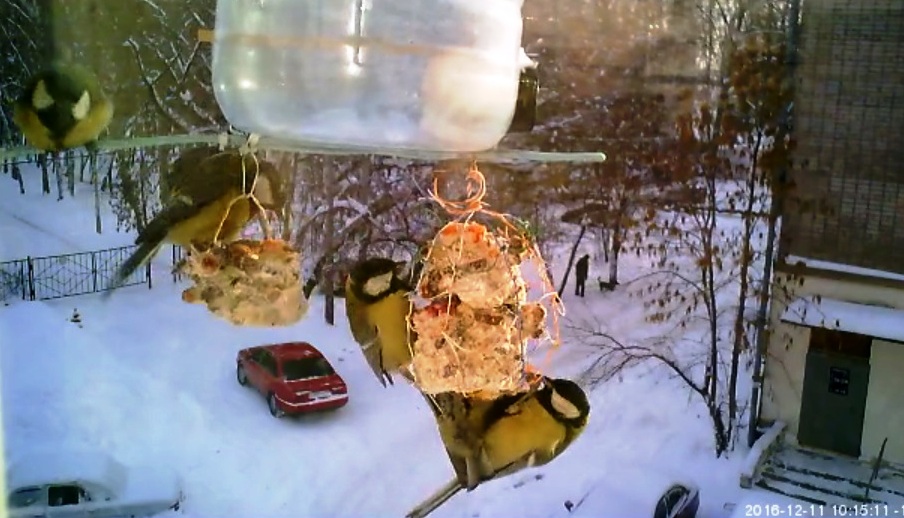 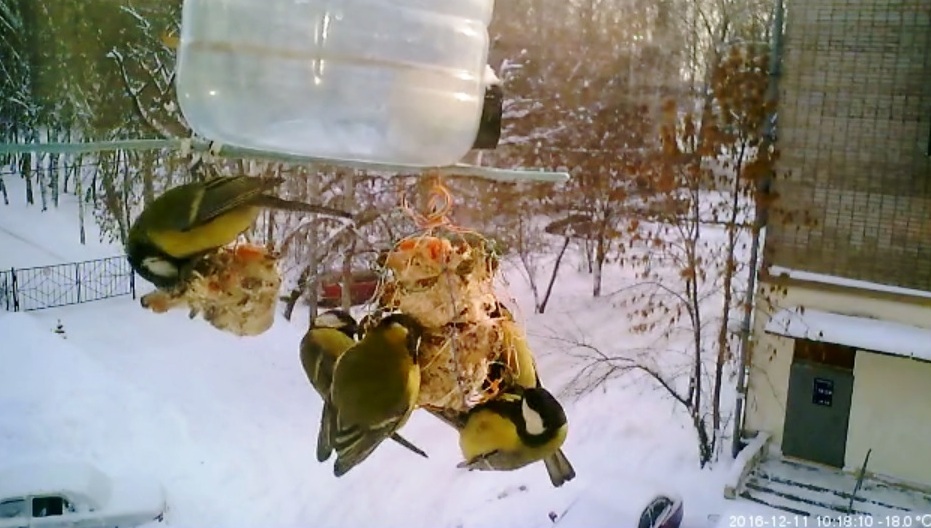 These pies are made of mixture of oat flakes, dried apricots and bananas (tits seem to not like neither apricots nor bananas, as you can see), crushed peanuts and sunflower seeds without shells.

The feeder was initially created to feed black sunflower seeds, but birds show themselves capable to carry out up to 1 kg of the seeds per day, and that's both a little expensive and requires re-filling of the bottle each day.

Great tits seem to be the most frequent visitors of the feeder, but I already do see blue tits each day. I'm saying "already" because the further to winter, the more different species come to town. There were woodpeckers last season, and bullfinches are usual guests in February and March.

These tits come to the feeder before it gets light. Screenshot below was from yesterday morning. 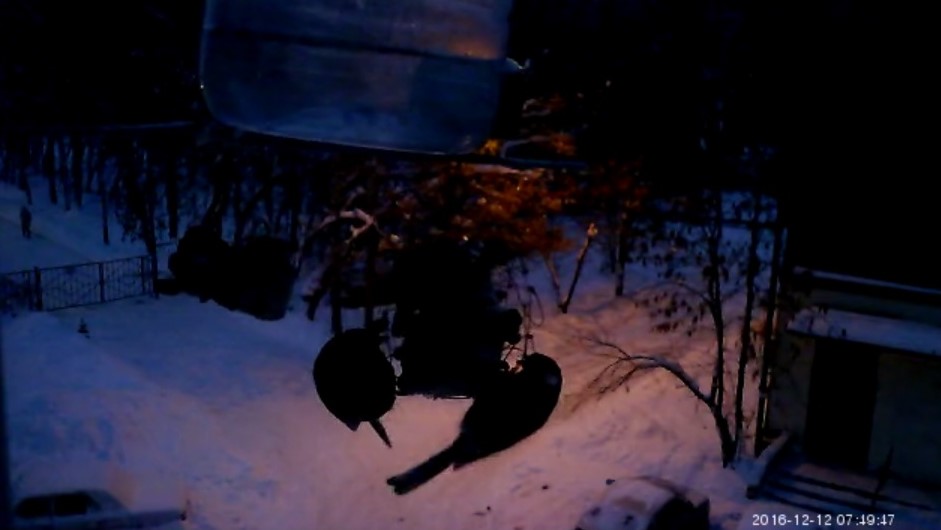 Yesterday this cam saw a lot of activity and it was very cold (minus 23C) when the 6 tits below visited. I had seen 9 there before this. 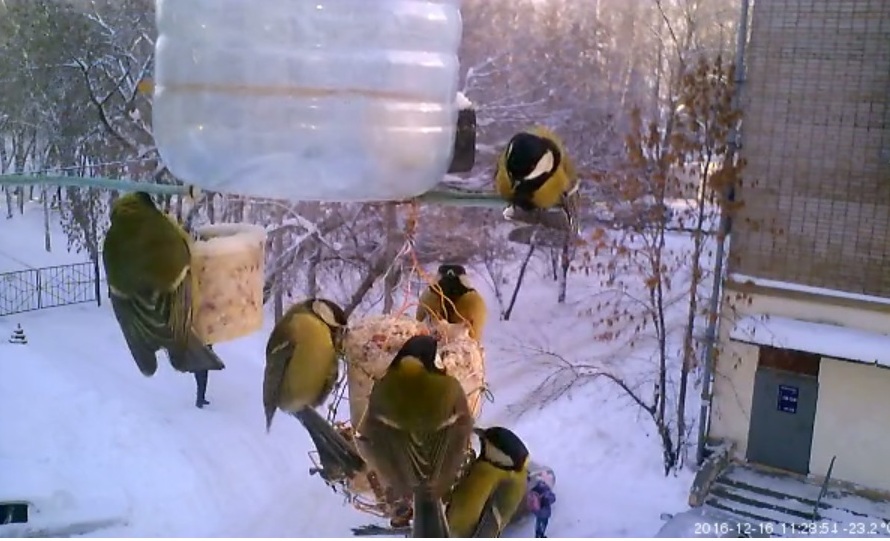 Today, the birds arrived early again, before it was light. 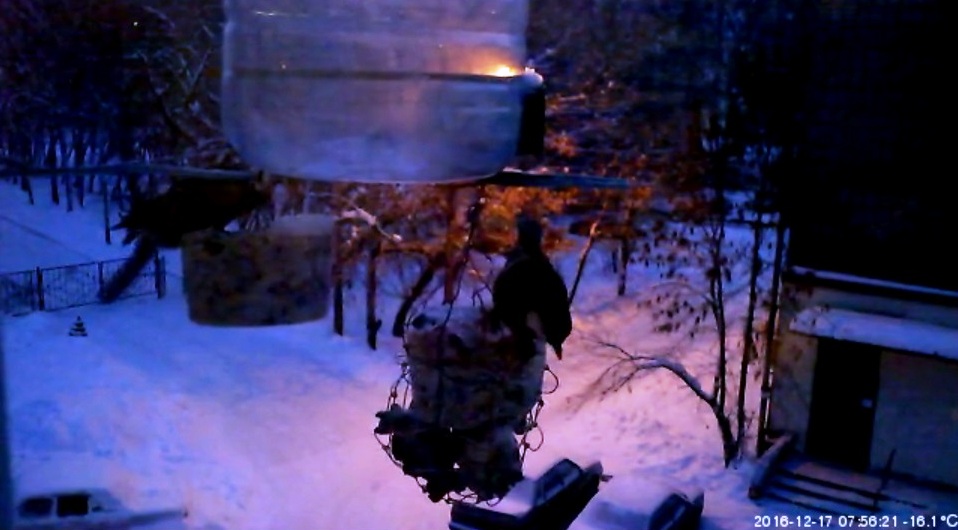 When I checked a few hours later I discovered that the feeder had been 'modified'! 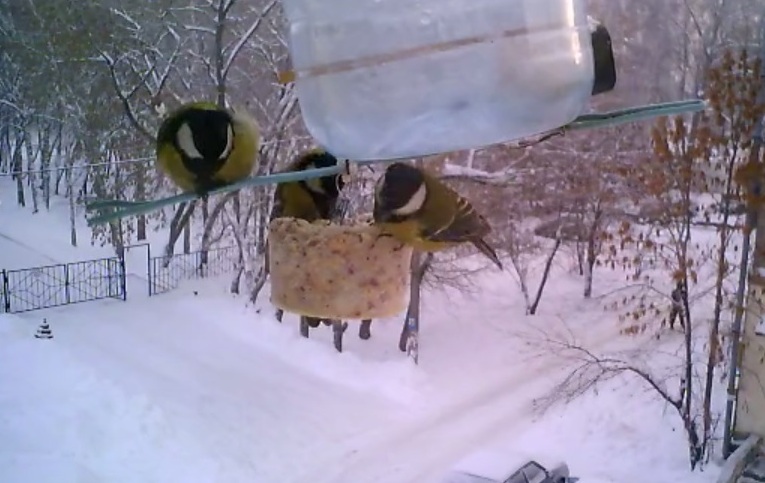 With only one fat/suet cake left there was not quite as much room for as many birds, but at least it wasn't as cold as yesterday. 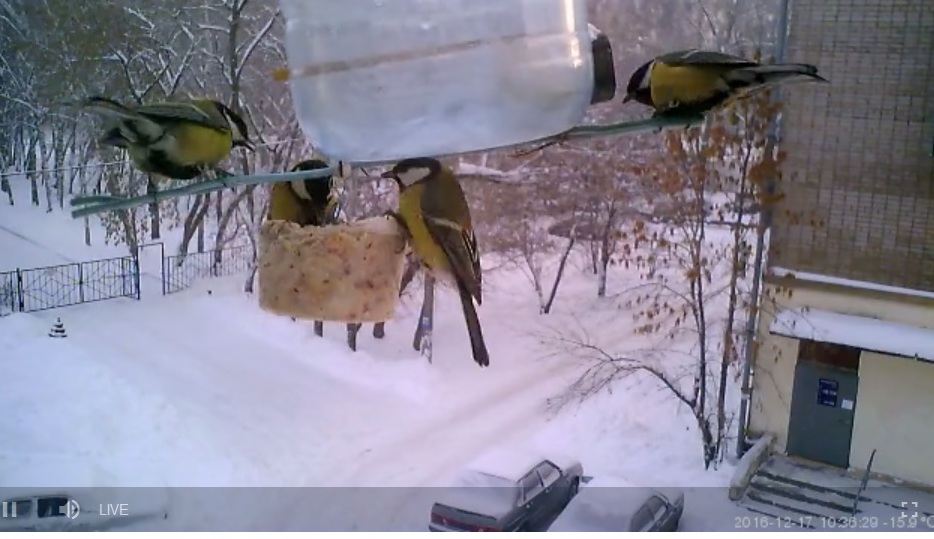 I suppose the net of suet fell down. I wonder if the birds found it on the ground and have been eating from it there

Still nothing there the one side now.

I can't believe how these Great Tits arrive while it's still so dark. You can almost not see the bird, it's so dark. 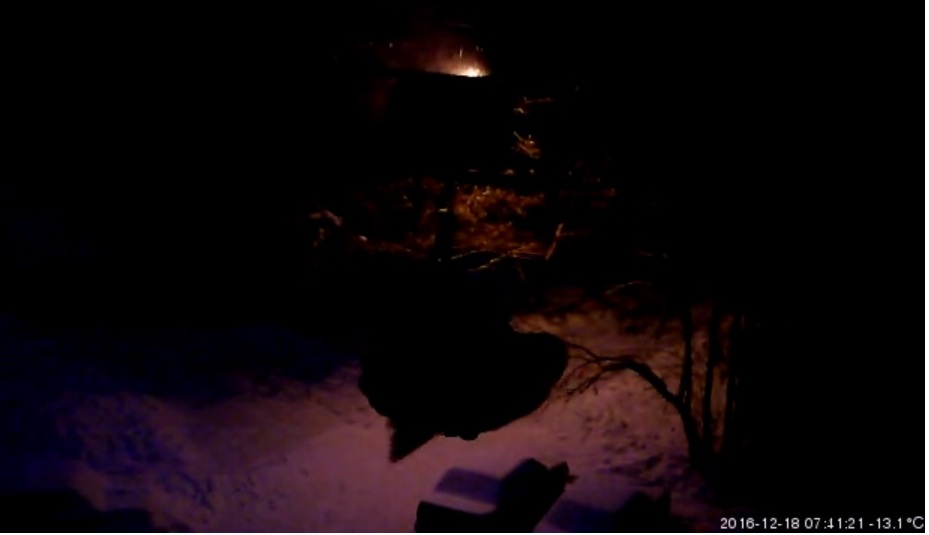 As it got a bit lighter there I could see that the suet cake that must've fallen off yesterday has been replaced. It didn't take long for a few Tits to show up and frantically start pecking on them. 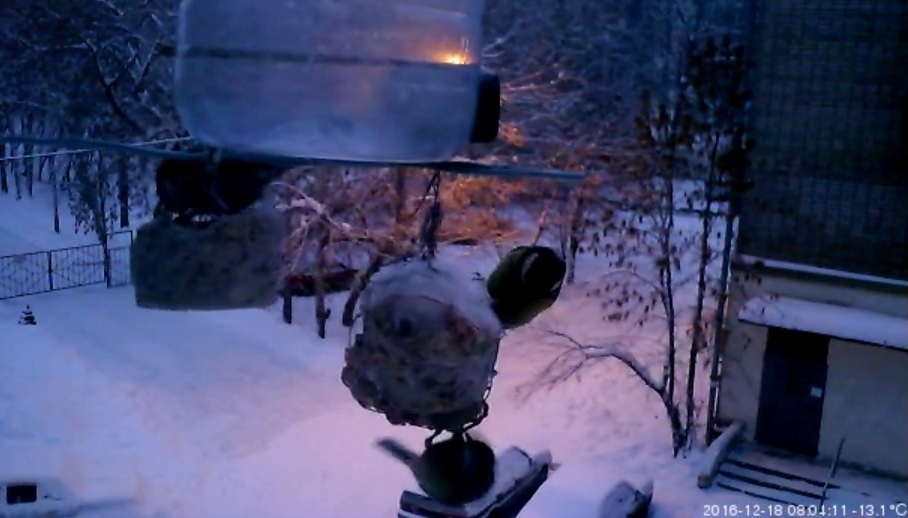 It was extremely cold for these little birds today, at minus 31C when I first looked. I only saw one Tit visiting for a while. He pecked at the suet, but took frequent breaks on the wooden stick perch - maybe the fat was too cold for his feet, or the energy spent fluttering and pecking meant a need to rest and conserve energy often? 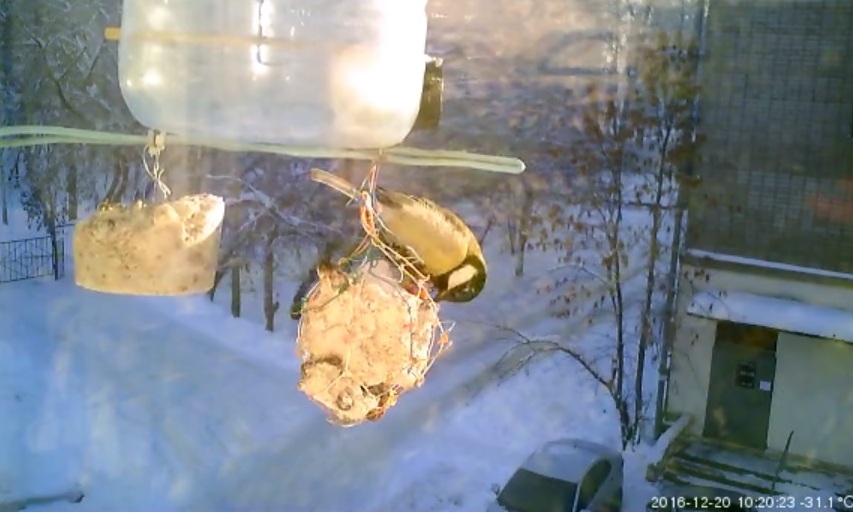 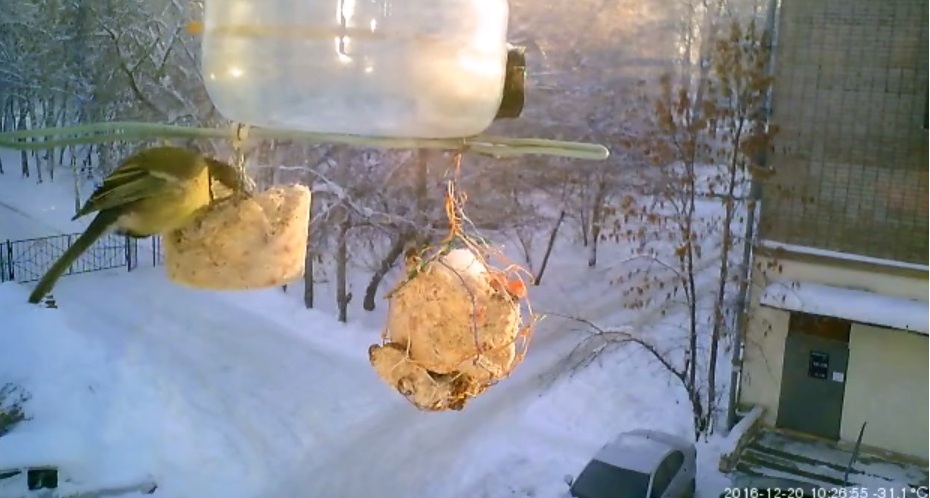 He was joined by another Tit some minutes later when the temperature went up slightly. 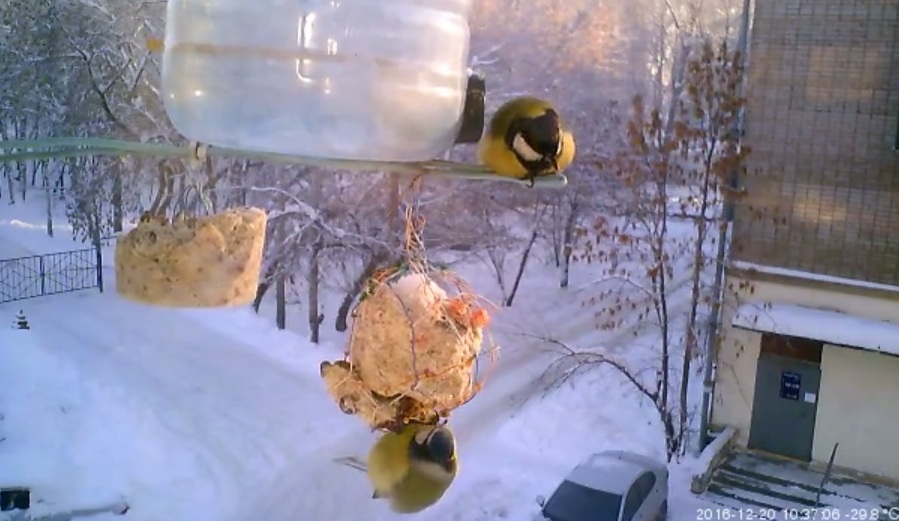